Peru is known as the “Land of the Incas” since it was home to the once thriving pre-Columbian civilization that dominated the region for several hundred years. It was the jewel of the Spanish Empire, which held the country for more than 300 years. Peru contains some of the finest archaeological remains in the world along with sheer natural beauty, making it an altogether wholesome travel destination. The great Andes mountains dictate the landscape, while sloping down to the east is a thick rainforest and the mighty Amazon River. To the west spans a long Pacific shoreline, much of it desert, but there are popular surf spots along the coast.

A trip to the lost city of Machu Picchu is a global phenomenon. The immaculate remains and the ambience of being steeped in cloud cover on a mountain top make it an ethereal experience. Many people chose to reach the site by hiking the Inca Trail, a multi-day trek which takes adventurous travelers to a number of Inca sites before reaching the Lost City. Further intriguing discoveries await at the Nazca lines, where a flight over these ancient markings provide intriguing insight into past lives. 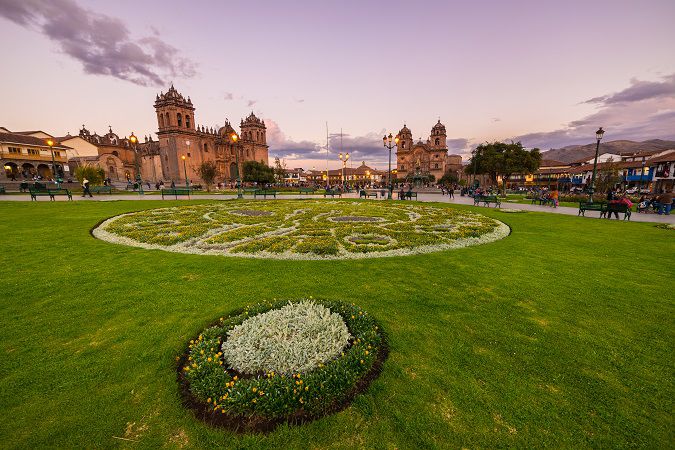 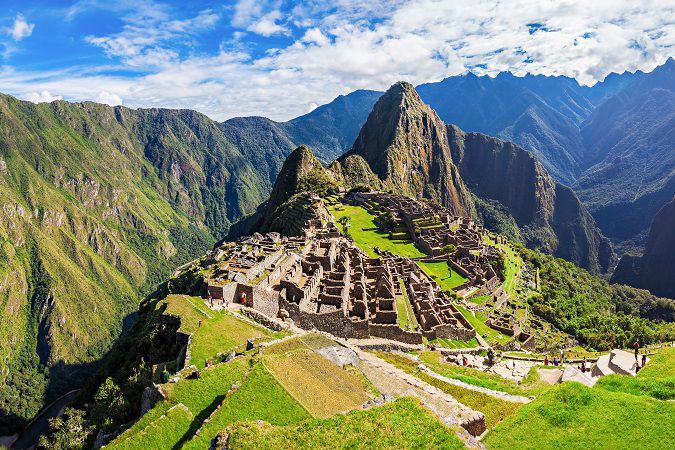 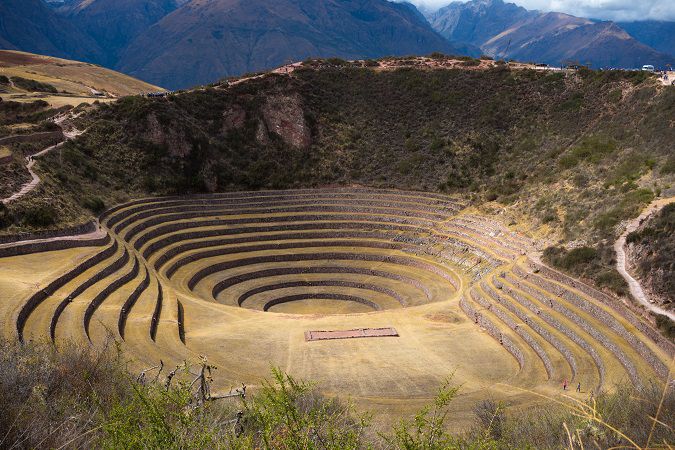 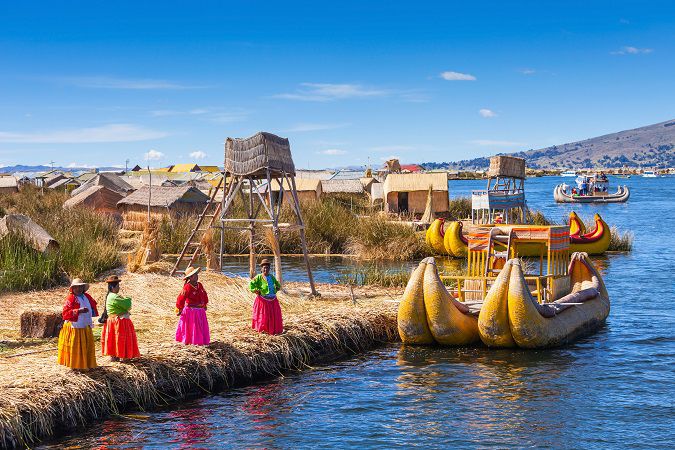 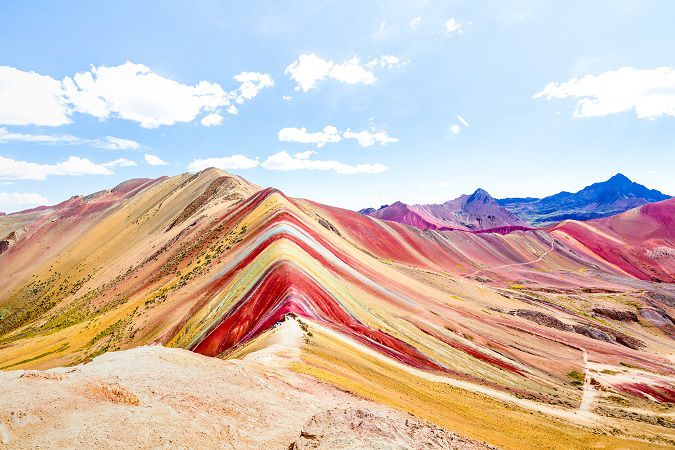 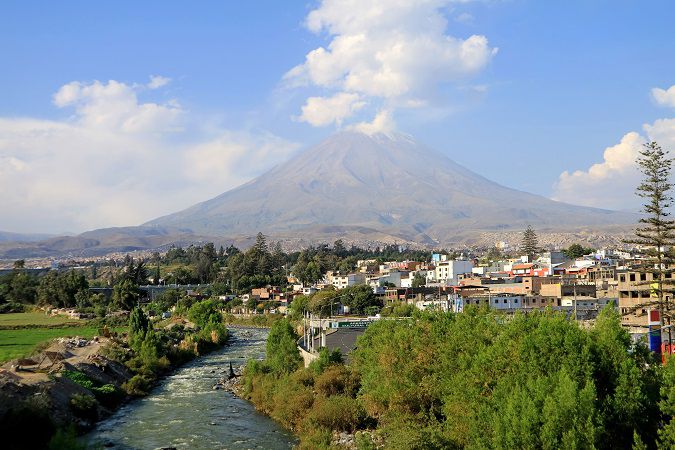 Peru is a tropical country and as such, it experiences two distinct seasons: the ‘wet’ season and the ‘dry’ season’. You may wish to plan your travel schedule around these seasons. In the western rainforests you can expect rain all year round, although the wettest months are between December and March. During this time, the heavy rain only lasts for a few hours per day, when it is best not to be exposed as flash flooding can occur. The driest months in the rainforest are between June and September.

On the east coast of Peru, the hottest time of year is between December and March, which is also the most humid and most popular time for beach vacations. Between April and November, a lot of the shoreline around Lima and southward can be cloaked in fog, but the northern beaches tend to see sunshine.

In the mountains, the wettest months are between December and March, and the driest are June to August. The latter period coincides with the peak tourist season around the Andean highlands, such as Cusco and Machu Picchu. Although you will be competing with massive crowds, this time of year provides the best conditions for hiking the Inca Trail. There can be a long waiting list for the classic trek though as they only allow 500 people per day. Book well in advance, upwards of 4-5 months out or risk doing one of the alternate paths. Machu Picchu is closed annually every February for maintenance, so don’t try to visit Peru at this time.

Evidence of human settlement in Peru dates as far back as 9000 BC, to the time of the Nazca civilization. This people left curious markings in the desert, only visible from high in the sky, known as the Nazca Lines that are thought to be for communication. The Inca Empire grew in strength in the 13th century, who dominated the land north of Ecuador, south of Bolivia and in parts of Chile. They based their city around the great Andes mountains as their spine, with an intricate trail network linking urban centers. The city of Cusco was the capital and the more recently discovered Machu Picchu was deemed to have a high importance in the later years of the empire, but its true purpose is still largely a mystery.

The Incas fell to Spanish rule when conquistador Francisco Pizarro rode in and captured the emperor Atahualpa in 1532. Peru became an important colony for them, which they plundered for riches, most notably silver which they traded all the way until the 18th century. The silver mines were productive through slave labor, and the Spanish used native Amerindians to build their empire. Interestingly, while the rest of Latin America was succumbing to wars of independence, Peru remained aligned to the Spanish crown.

Calls for freedom finally came from Jose de San Martin, liberator of Argentina, and Simon Bolivar, a ruler from Venezuela, both of whom dreamt of a South America separate from Spain entirely. Partly due to their efforts, Peru became independent in 1824. For the next 60 years, Peru was involved in a series of territorial disputes, such as the War of the Pacific with Chile, which it lost. Peru remained allies with neighboring Bolivia due to the nations’ cultural and historical similarities. At one point, the two nations nearly became unified, although this collapsed as a result of a power struggle.

To gage some of the ancient Inca culture, it is best to head to Cusco where history lives. Head to a show in the Centro Qosqo de Arte Nativo (El Sol 604, Cusco), which was founded in 1924 and has spectacular music and dance performances most evenings.

Also in Cusco, you can head to Teatro Kusikay (Union 117, Cusco) where there is a daily evening show called Paukartanpu. This colorful production is based on a religious festival which offers modern and fun insight into Andean culture. There are impressive acrobatics, traditional dance, music, and folklore. The show starts at 7:30 p.m. every Monday through Saturday.

A huge amount of Peru is within an alpine or sub-alpine mountainous climate, with altitudes over 11,500 ft. Daytime temperatures do not rise above 50°F in these areas and night-time dips below freezing. As a general rule, the higher you get, the colder the weather. In the most inhabited areas, daytime temperatures average about 64°F. Cusco lies at just less than 11,000 ft and travelers coming here should allow sufficient time to acclimate to the altitude.

If you are an Indian national with an ordinary Indian passport, holding permanent residence OR if you have a visa with at least 6 months' validity from USA, UK, Canada, Australia or any of the 26 Schengen countries of Europe; you don't need a temporary visa for Peru for the maximum 180 calendar days' stay.

Car rental is possible in Peru, although the quality of the road network is poor. Some improvements have been made recently, although falling rocks from the mountainside remain a danger. During rainy season, driving independently on Peru’s roads is best avoided as passes can become blocked or dangerous. If you do decide to rent a car, Europcar (+11-51-1-222-1010) has locations in Lima, Cusco,and Arequipa. Budget (+11-51-1-517-1880) and Hertz (+11-51-1-517-2402) also offer a range of vehicles.

There are currently four operational railroads in Peru: Lima to Huanacayo, Huanacayo to Huancavelica, Cusco to Machu Picchu, and Cusco to Puno. Each line has rewarding scenery and is a great travel experience, albeit the distances are long. The service between Lima and Huanacayo is the second highest railway in the world and the tallest in altitude in South America. The journey takes 11 hours high into the Andes, and you can be assured a comfortable and hospitable ride through Ferrocaril Central Andino with breathtaking views. You can continue deeper into the white snowy mountains by taking one of the five-hour rides to Huancavelica that are offered twice a day.

The other form of ground transportation around Peru is bus. Buses come in many shapes and sizes, the smallest being a micro, which is really a minivan, also known as a combi or custer. They display their route in the window and usually only leave when they have a full load of passengers. Maximum capacity is about 11 people, although they may stop to pickup more along the way. A variation of this is the tourist van, which will be an express service specifically for travelers. 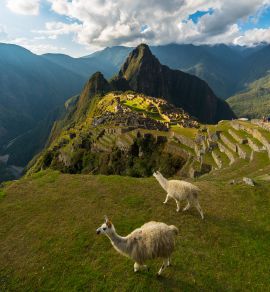 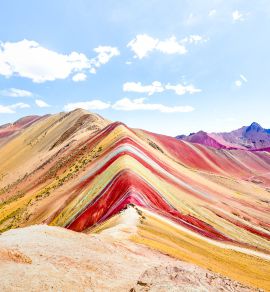 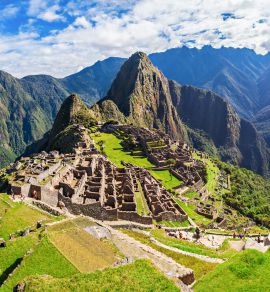