The ideal tropical honeymoon destination if there ever was one, the Republic of Seychelles archipelago is one incredible beach island retreat. The ‘Jewel of the Indian Ocean’ is uniquely beautiful and bathed in year-round sunshine, presenting visitors with myriad options for water- and land-based activities and legendary scuba diving and bird watching.

Located off the east coast of Africa just below the equator, there are more than 100 islands in this large group from the well-known Inner Islands down to the otherworldly Aldabra Atoll in the Outer Islands. Take no notice if you hear Seychelles is overrated because the beaches are numerous and stunning. They really have to be seen to be believed as the epitome of tropical beauty, with the cleanest and warmest of waters lapping at the most idyllic of sands, usually flanked by angular palms and backed by lush vegetation.

Most tourists come for the three main islands of Mahé, Praslin and La Digue. Each has a strong selling point, though all have great beaches and high-end hotels with all the facilities. Unlike the Maldives, these islands also have hilly interiors, often given over to national reserves that can stretch to the ocean. Water sports, scuba diving, boating trips and bird watching ventures are eternally popular. 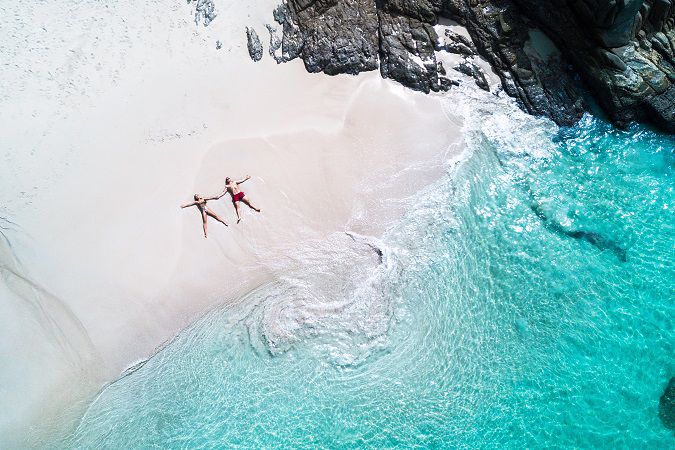 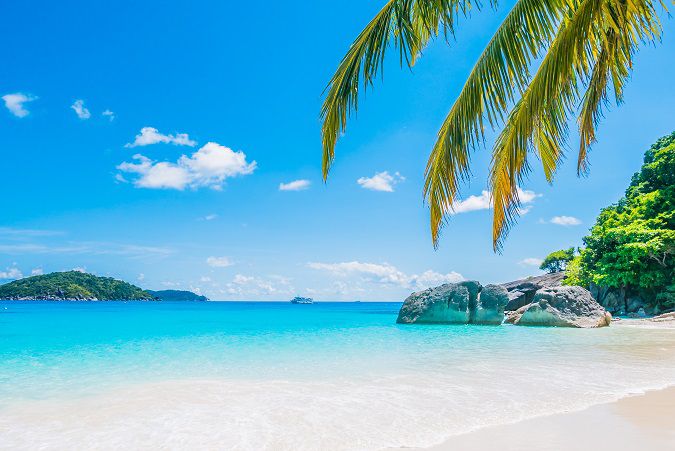 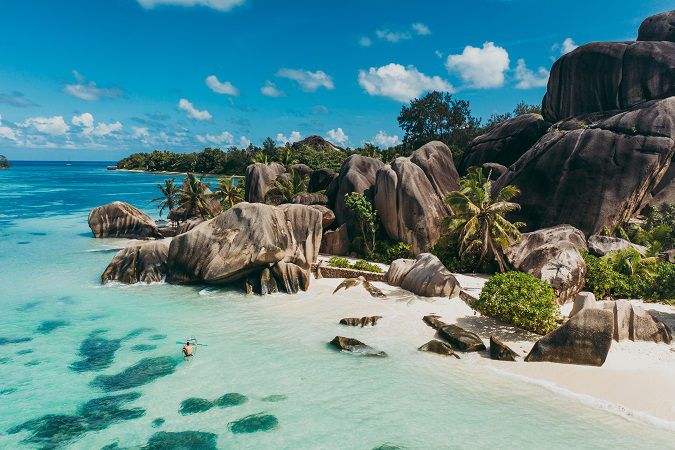 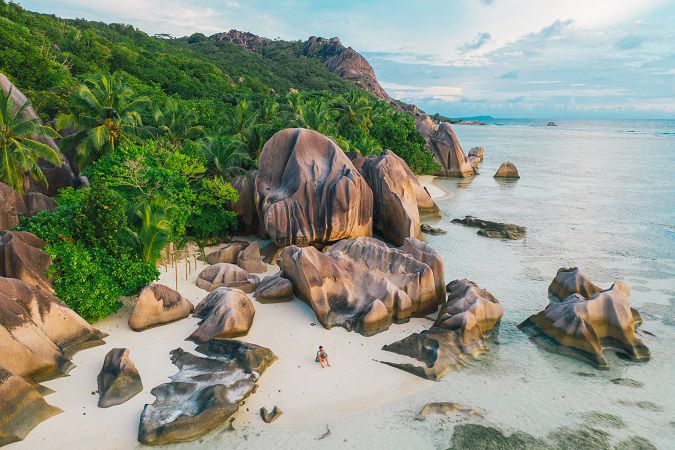 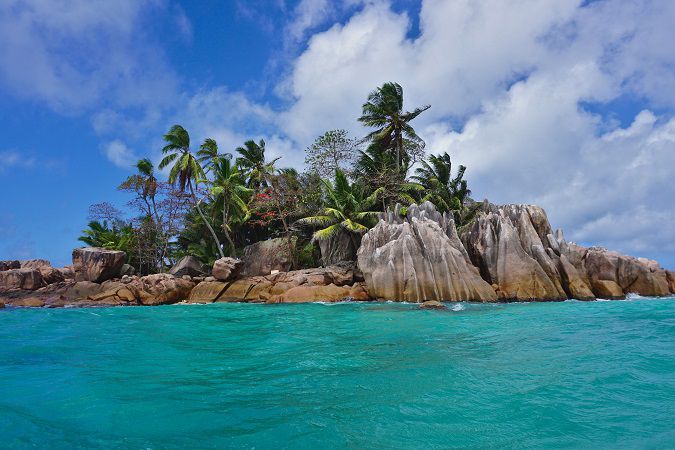 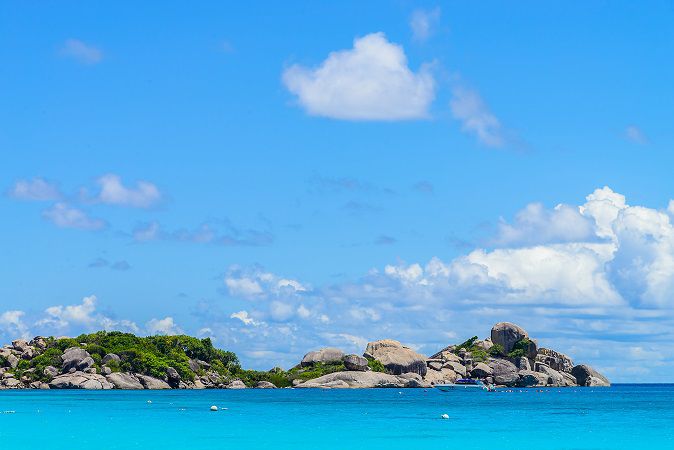 The weather is driest and the most pleasant between May and October and this is when most people visit. Be aware, however, that hotels are full to capacity and more expensive. Although there is more chance of rain during the northwest monsoon (November through March), many North Americans still visit at this time to escape freezing winters making it also quite busy during the winter period with not much deviation in hotel prices. Cheaper rates can often be found February through April.

The best times for scuba diving are April/May and October/November, although visibility is good year-round, as is water temperature. For marlin fishing, the best catches are found October through December.

Despite being charted by the Portuguese and visited by Asians, the French were the first to officially colonize the Seychelles, in the mid-1700’s. They took control in 1756 at a time when piracy was commonplace. The islands were named after the then French finance minister, Jean Moreau de Seychelles.

The Seychelles prospered better under the British, who rolled in around the late 1700’s/early 1800’s, during the days of the French Revolution and Napoleonic Wars. The 1814 Treaty of Paris saw the ceding of the Seychelles to Britain and it became a crown colony separate from Mauritius in 1903.

The British transformed the islands economically, with the establishing of coconut, sugar cane, and tea plantations. Cinnamon and vanilla were also widely cultivated exports and they built up the capital Victoria (renamed after Queen Victoria). Main landmarks include the Courthouse, nearby Clock Tower, and Victoria Botanical Gardens established in 1901. Another colonial landmark is the State House, built in 1910 to be the official home of the president.

The Seychelles was granted independence from Britain in 1976, which was closely followed by a coup and eventual socialist rule. It has been a free country since just the early 1990’s and remains within the Commonwealth. Tourists have flocked here ever since, with the industry making up a significant portion of the country’s revenue. Today, the Seychelles is celebrated for its fine beaches, fishing, birding and scuba diving, and is one of the main havens in the world for honeymooners.

The locals are known as Seychellois and their ancestors are a combination of African slaves, West Indian Creole, Asian traders, and a mix of British and French settlers. The language is a unique offshoot of Creole and they have developed intriguing music that features lots of drumming, dance and dress, which are best seen during one of the main festivals, such as the Creole Festival.

Arts and crafts are prominent, too, with painted silk fabrics popular items to see in the galleries or souvenir shops. Basket ware and textiles are also in evidence, along with jewelry and gifts crafted from coconut shells. Pottery items and sea shells are also popular, though visitors should beware that a certificate is needed to take the famous coco-de-mer palm nuts home.

While these items are best found at markets in Victoria, which is also the best place to see a festival, most of the main hotels will also have shows on, along with souvenir stores to pick up local crafts.

The majority of locals in Seychelles live simply in thatched houses; many are fishermen, workers in plantations, or staff within the tourism industry. Seychellois are casual and very friendly, but somewhat conservative. To that effect, visitors should avoid wearing beach attire in Victoria and not drink in the streets.

Seychelles is close to the equator so warm weather is prominent year-round, though often overly humid. The average temperature is 84°F (29°C) and the sea breeze not much less. Despite this heat, the islands are usually breezy, which tempers conditions on the beaches somewhat. The best time to visit is generally May/June through September/October.

Being tropical—meaning warm, cool and dry followed by hot and wet as opposed to defined seasons—the Seychelles can be visited at any time to enjoy the sun. Just avoid the November-March northwest monsoon to be sure to miss the worst of the rain. The drier, cooler southeast monsoon (May through September) is more pleasant and thus high season. April and October are shoulder months and less predictable.

Luckily, the Seychelles does not endure hurricanes, with the worst weather coming by way of tropical storms around January/February. Even at this time—which is the warmest part of the year—tropical storms are not the norm, with daily showers being par for the course. The benefit of this set-up, which typically happens in the late afternoon is that it cools the air considerably.

Evenings are cooler in the Seychelles, with lower humidity and typically calming breezes, but the sun remains powerful year-round. Tourists should always pack high-numbered sun block, especially if they have kids. It is widely available for purchase, although is more expensive than back home. Lightweight, cotton clothing is your best bet at any time, but consider a light coat if visiting November-March.

Seychelles is a visa-free country, however, a visitor's permit will be obtained upon arrival if you meet certain criteria and can show: a valid return or onward ticket for duration of the visit; confirmed accommodation, OR invitation letter, if staying with friends or relatives

Aside from the bus, getting around Mahé and Praslin islands is best done by taxi. They are numerous and metered and can be booked through the Seychelles Taxi Operators Association (+248-251-9355). There are also taxis on La Digue, although hotels can usually coordinate transport to the smaller islands if they have roads. Those that don’t are typically small enough to be negotiated on foot or by bicycle.

Taxis can be expensive if you’re on Mahé or Praslin and use them a lot. They have a flag-pull rate and are metered per kilometer, although you can organize an island tour with them for a set price. If you want to see Mahé, it is quite doable by rental car. Drivers should be at least 21 years and have held a license for at least three years. Prices are similar to big US cities, but can often be negotiated (locally) if renting for three days or more, though it’s best to pre-book online.

While it is cheaper to go between Mahé and Praslin by boat than fly, it is quite steep nevertheless. The high speed Cat Cocos catamaran takes an hour to make the trip and is the best option with respect to cost. A cheaper public option between Mahé and Praslin is the Belle Serafina schooner ferry, which takes three or four hours and also goes between Praslin and La Digue. If you want a more intimate trip, private vessels also run this route or you can rent a boat and guide yourself throughout the Seychelles.

The blue, government-run SPTC buses are the primary form of public transportation and the cheap way to travel. They run main routes on both Mahé and Praslin islands daily between 5:20 a.m. and 9:30 p.m., every 15 minutes or so. Buses are air-conditioned and comfy enough, although it is best to avoid long distances on Mahé as the island is hilly and drivers test the speed limits. Schedules are also a bit unreliable.

There is also a bus available from the airport on Mahé to Victoria and the main beaches, along with an 18-seater tour bus. On La Digue, visitors will have to rely on taxi travel, while the other islands are small enough to get about on foot or by bicycle.

Although Seychelles has a relatively low level of crime it is advisable not to carry large sums of money, items of value or important documents such as passports on your person. Most hotels offer facilities for safeguarding these. Similarly, do not take these to the beach or leave them in your hired vehicle or on display in your hotel room.

Avoid changing all your foreign exchange into Seychelles Rupees (SCR) at one time but rather calculate your daily requirements and change only what you need for a specific period of time.

Do not change your foreign exchange illegally with unauthorised traders but rather through banks, hotel cashiers and at the Bureau de Change at the airport.

Do not stay at unlicensed tourism premises as these may not offer you the quality of vacation that you had envisaged and may lead to a range of disappointing experiences.

As with many tourism destinations be prudent when it comes to walking alone at night or in secluded places such as remote beaches. If you are intending to go out alone then it is wise to advise someone at your hotel of your proposed whereabouts.

Remember that the sun in Seychelles is very strong. Do not lie in it without applying sun block of an appropriate strength for your skin.

Please do not litter. If there are no litter bins immediately available, then please take your litter back to your hotel and dispose of it accordingly.

Please resist the urge to collect seashells along the beaches as many are used as habitation by hermit crabs. Collecting shells is prohibited in nature reserves, marine parks and reserves in Seychelles. The unique and unusual tropical flora is beautiful and for it to remain so, it is important that you admire it, but leave it for others to enjoy. Any flora taken as souvenirs must have a certificate and an official export permit which must be produced, when checking in at the international airport.

Be considerate towards the fauna and sensitive to its sometimes fragile nature. Please walk carefully on the reefs and do not feed sea birds, mammals, turtles or tortoises or disturb them or their nesting grounds. 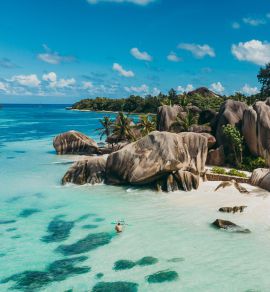 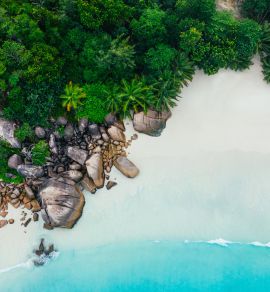 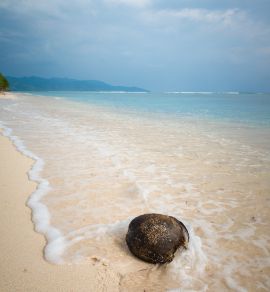