Travelers often label the Middle East as a war zone, an area of religious conflict and a region that should not be visited. If you fall into this category, you have no idea what you’re missing out on in Jordan. Steeped in the most interesting of histories, home to the richest of cultures and boasting an undeniably gorgeous landscape, Jordan is the pearl of the Middle East.

Jordan’s sights and activities are some of the most famous in the universe. Filled with religious and political importance, the Dead Sea, the Wadi Rum desert and the ancient complexes of Petra and the Citadel are marvels the world over.

Much the same can be said about the activities on offer. Adrenaline junkies will be pleased with the number of hikes, sand-dune excursions and scuba diving opportunities available. Those looking for a slower pace could always spend a little time floating in the Dead Sea or catching a bird’s eye view of the land from a hot air balloon. Jordan’s terrain is extremely varied which makes for an interesting and exciting trip. From large expanses of desert to the lush greenery in the Dana Nature Reserve, the countries surrounding Jordan are also culturally and historically interesting and would make for a great Middle Eastern expedition.

Many accommodation options are available from five star hotels to student backpacker hostels. The cuisine is well worth a taste and is typical of Middle Eastern fare. Ingredients as chickpeas and eggplant can be found in many Jordanian dishes. Local food tends to be cheaper than international options, but there are many spots for those looking for something familiar. 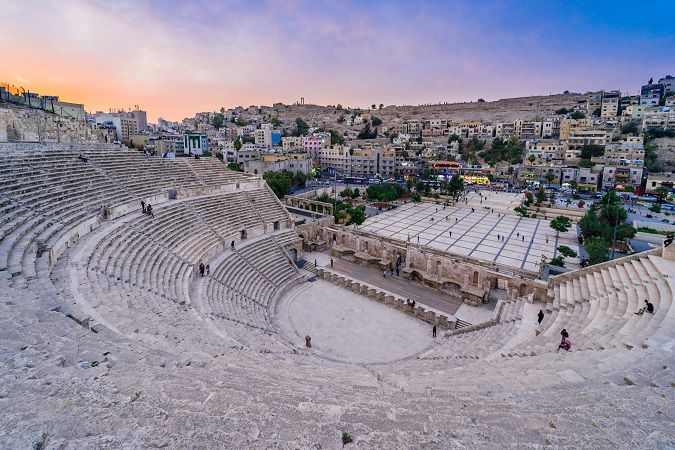 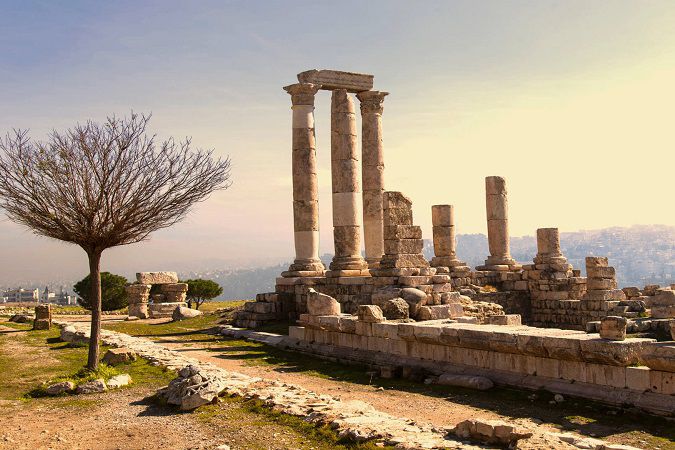 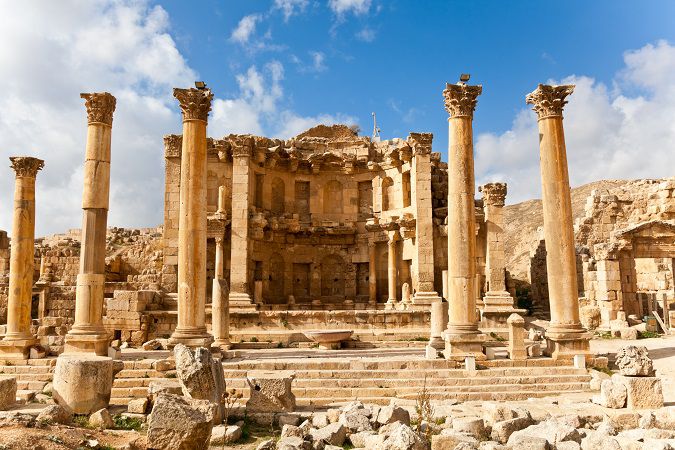 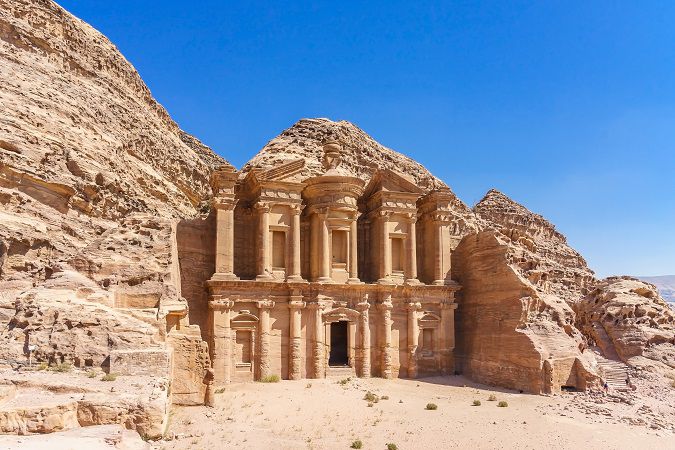 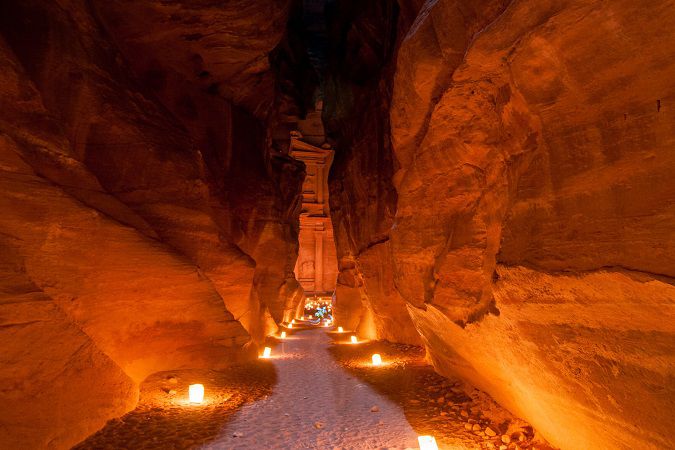 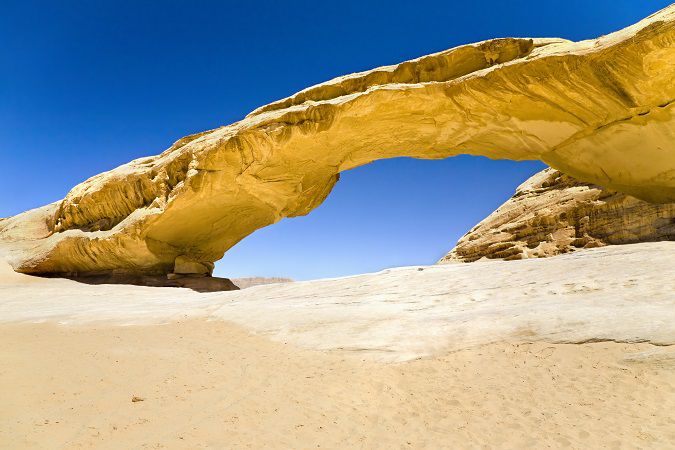 The best time to Visit Jordan largely depends to which parts of the country you want to see. The most pleasant weather countrywide can be experienced in the springtime, between March and May and again in fall, between September and November.

There are a few other considerations to take into account, besides the climate. The holy month, Ramadan, places significant restrictions on foreigners with no one allowed to smoke or drink publically during the day. Transportation options and accommodation are usually quite limited during the celebration after the holy month, Eid al-Fitr, so it would be best to book well in advance if you have a trip planned that coincides with this festival.

The region’s first known inhabitants were the Nabataeans who were responsible for building the remarkable city of Petra on the wealth they derived as traders between Europe and Asia, along the Silk Road. Soon after, the land was included in the Byzantium Empire. Following the Roman decline, the Umayyad took over the area shortly after the death of the Prophet Muhammed in AD 632.

The powerful Ottoman Turks seized control in 1517 and ruled over both Jordan and Syria as one. Only after WWI, when the Turkish Empire was disassembled did their rule end. Following the battle, the land was divided between Western powers. The area known as Transjordania, including the Jordan River and Palestine came under British Mandate which ended in 1946 when Transjordania gained independence.

The troubles had only really just begun, with much of the West bank and Palestinian territory being granted to the Jews who had already migrated to Jerusalem a decade earlier to set up their homeland. The struggle between the Arabs and the Israelis has been an intense news focus ever since, with Jordan losing the West Bank permanently in the Six Day war, and becoming the home of millions of Palestinian refugees. At the same time, that land became tentatively part of a semi-formalized Palestinian State, while Jordan strives to conduct more cordial relations with their neighbor than any other Arabic state.

Following independence, the country was under the powerful control of King Abdullah ibn Hussein who ruled from 1953 to 1999. King Hussein, a member of the Hashemite Dynasty, was the Emir of Transjordania in the 1920’s – a position which was mostly title-based under British rule.

After King Hussein’s death in 1999 his eldest son, King Abdullah II assumed the throne along with his wife, Princess Muna. King Abdullah II has opened up Jordan politically and economically far more than any past ruler ever intended. In 2000 Jordan signed free trade agreements with the United States and the European Free Trade Association.

Jordan’s location, at the meeting point between three continents, has helped to shape its culture rather strongly. While Arabic and Islamic elements are quite powerful, Western influences have been just as strong. Now that the country is opening up economically, several American and European cultural markers are seeping in.

Jordan has a strong musical tradition and a long history spanning centuries. From traditional instruments like the shababa (flute or pipe) and the gerbah (bagpipes) to the improvised poetry, Jordanian musicians have been getting it right for a long time. Although Western music is starting to become popular, local tunes continue to reign supreme.

The culture of the Bedouin people has also strongly influenced that of the entire region. One of the main examples of this can be seen in Jordanian dance, which stems greatly from Bedouin roots. The most famous national dance, dabke, in which participants hold each other’s shoulders and move around the room in a circle is a clear legacy of the cultural imprint.

Jordan’s weather are as varied as the country’s terrain. The country’s climate is largely determined by altitude which makes for a range of climes across the land. The low areas tend to have the hottest summers while the high lying areas have particularly cold winters.

Summer spans from May to August and is the harshest in July. Temperatures climb to highs of 96°F and the humidity can be unbearable, especially in the low-lying areas like the Jordan Valley. The desert regions are also extremely hot but not as humid which makes for surprisingly more comfortable conditions. Tourists visiting during this period should make sure to wear sunscreen and keep well hydrated as the risk of sun stroke and dehydration is at its highest.

Winter runs from November to February and in many of the higher areas can be rather cold. Amman and some of the deserts have been known to receive snowfall and reach freezing temperatures. The low lying areas experience more temperate winters where the thermometer tends not to dip below 60°F.

There are two types of taxis available for public use in Jordan. The first are regular taxis which, similar to those in New York, are bright yellow in color and can be flagged down on the side of the road. These are in good working condition, but can be quite pricey on longer journeys. Most taxis in the larger cities have a meter, but in the more remote areas, drivers tend not to use them so prices need to be negotiated.

The second option is a share taxi which are called servees. These are more expensive than buses and minibuses, but are also much faster. There are no scheduled timetables as the taxis tend to leave whenever the vehicle is full. It is once again important to agree upon a price before departing.

It is possible to rent a car in Jordan with most of the international rental companies accounted for, including Avis, Hertz, Europcar and Budget. The conditions of the roads are quite good, but the same cannot be said for the quality of drivers, especially outside of major cities. Car rental is relatively inexpensive which makes it a great way to see the country.

The railway network in Jordan is not used for passenger traffic except for the line connecting Amman with the Syrian capital Damascus. The largest cities, Amman and Irbid have local bus services, but many travelers opt for service taxis instead as buses have no English signage or visible schedules, which can become rather confusing.

The bus network, on the other hand, is extensive and caters for both inner- and inter-city travel. There are many private companies to choose from including JETT which connects Amman with Aqaba, Hammamat Ma’in and the King Hussein Bridge. Trust International runs only between Amman and Aqaba while Hijazi operates between Amman and Irbid.

Public minibuses are also a good transportation option in Jordan as they tend to reach the more remote areas bigger buses cannot get to. These are generally much faster than private buses, but do not leave on a set schedule which means there may be a significant amount of waiting around before departure. 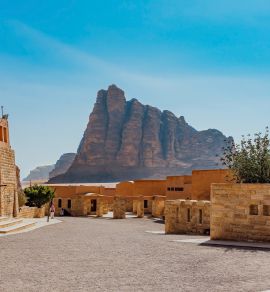 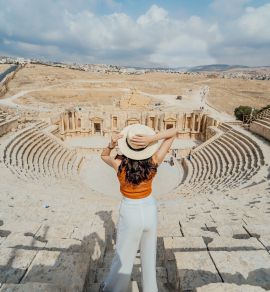 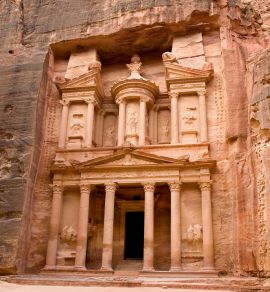 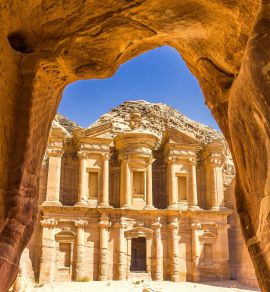