The story of Singapore is one of trials, tribulation and triumph. In a short span of just over 54 years, it has evolved from a colony to a city-state with a unique identity, forged by a spirit of never settling. It is this spirit that is imbued into the architectural wonders, lush parks, proud heritage, world-class attractions and amazing food of the cosmopolitan metropolis one sees today. Still, Singapore remains much more than the sum of its numerous attractions and high-rise buildings. It is constantly evolving, reinventing, and reimagining itself as a dynamic city.

Singapore has a tropical rainforest climate with no distinctive seasons, uniform temperature and pressure, high humidity, and abundant rainfall. Temperatures usually range from 22 to 35 °C (72 to 95 °F). While temperature does not vary greatly throughout the year, there is a wetter monsoon season from November to January.

There are four major races in Singapore – Chinese, Malay, Indian and Eurasian – with a growing proportion of citizens who are mixed-race and from other ethnicities. While Malay is the national language, English is used as the official business language, and most Singaporeans take a second language that is his/her mother tongue. If one listens closely to conversations between Singaporeans, one would find that the local language is greatly influenced by many languages and dialects. 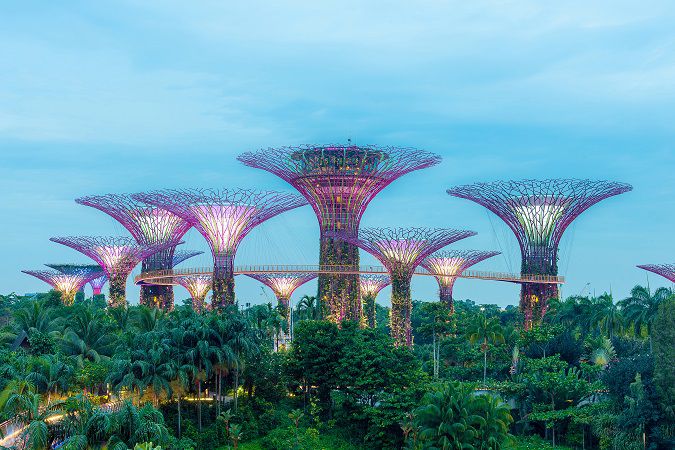 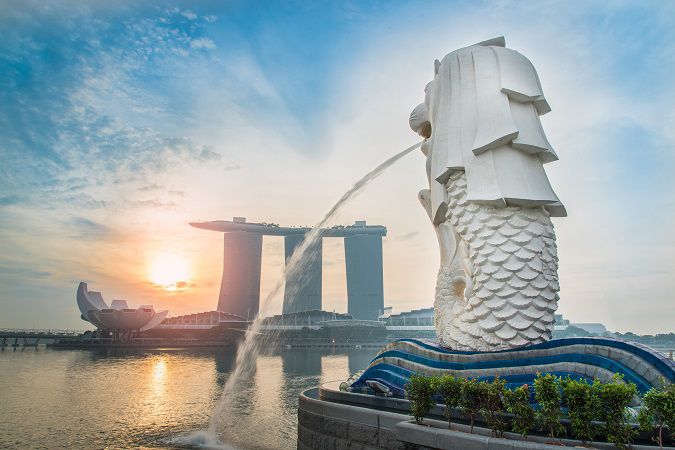 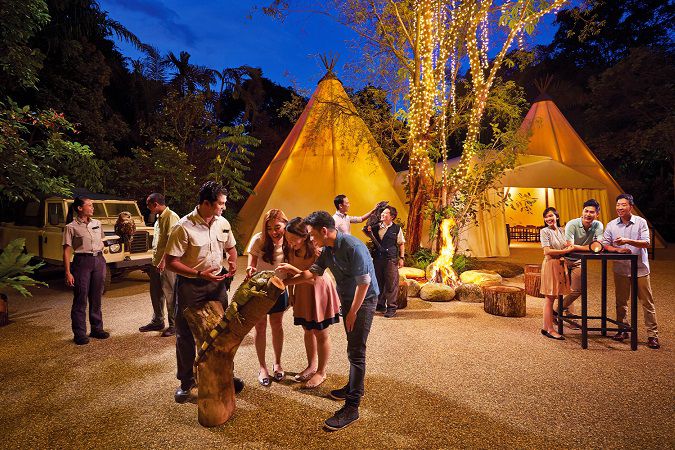 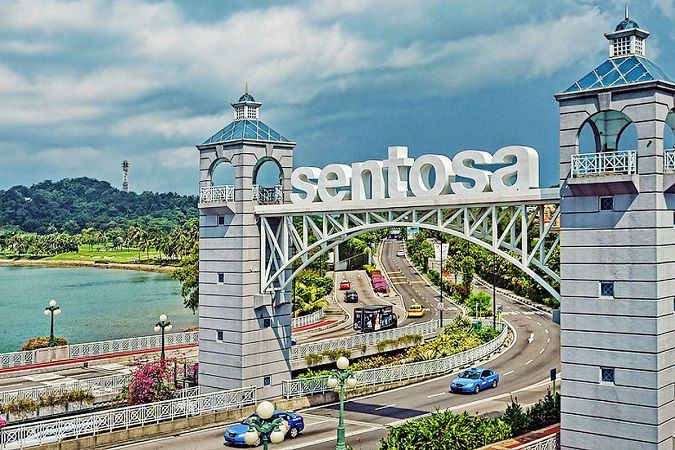 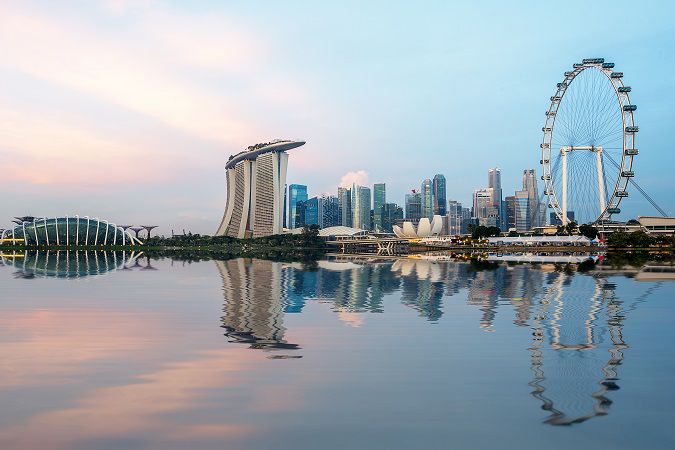 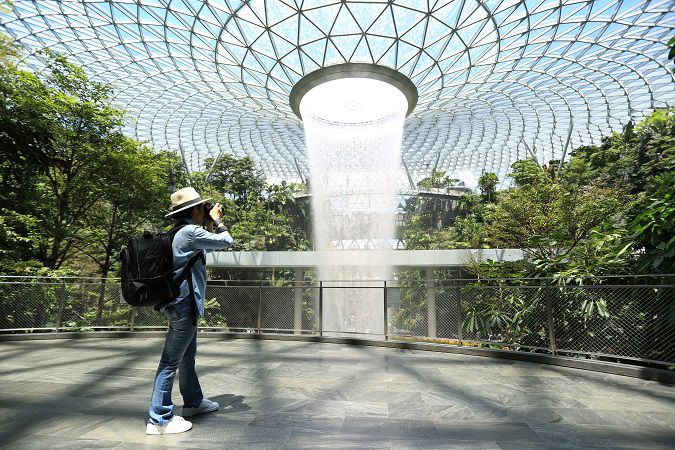 The busiest times for Singapore’s tourism and hospitality industries are not usually dependent on the rain, as precipitation falls across the board. Instead, the peak season follows the festival calendar. November through January brings droves of tourists, thanks to the Indian festival of Divali in November, Christmas/New Year in December and the Chinese New Year in January. Hotels and flights tend to increase in price during this time.

The northern hemisphere summer months (June to August) experience drier spells, although bringing an umbrella is still recommended. The climate is hot and humid, but it is much more comfortable for international visitors. The trick to enjoying Singapore is to expect rain, as it is likely that no matter when you visit and to plan in advance with quick-dry gear and layers.

While the earliest known historical records of Singapore are shrouded in time, a third century Chinese account describes it as “Pu-luo-chung”, referring to “Pulau Ujong” which means the “island at the end of a peninsula” in the Malay language. Later, the city was known as Temasek(“Sea Town”), when the first settlements were established from AD 1298-1299.

During the 14th century, this small but strategically-located island earned a new name. According to legend, Sang Nila Utama, a Prince from Palembang (the capital of Srivijaya), was out on a hunting trip when he caught sight of an animal he had never seen before. Taking it to be a good sign, he founded a city where the animal had been spotted, naming it “The Lion City” or Singapura, from the Sanskrit words “simha” (lion) and “pura” (city).

The city was then ruled by the five kings of ancient Singapura. Located at the tip of the Malay Peninsula, the natural meeting point of sea routes, the city flourished as a trading post for vessels such as Chinese junks, Arab dhows, Portuguese battleships, and Buginese schooners.

This also led to immigrants settling down in Singapore, and subsequently an amalgamation of diverse cultures.

Modern Singapore was founded in the 19th century, thanks to politics, trade and a man known as Sir Thomas Stamford Raffles.

During this time, the British empire was eyeing a port of call in this region to base its merchant fleet, and to forestall any advance made by the Dutch. Singapore, already an up-and-coming trading post along the Malacca Straits, seemed ideal.

Raffles, then the Lieutenant-Governor of Bencoolen (now Bengkulu) in Sumatra, landed in Singapore on 29 January 1819. Recognising the immense potential of the swamp-covered island, he helped negotiate a treaty with the local rulers and established Singapore as a trading station. The city quickly grew as an entrepot trade hub, attracting immigrants from China, India, the Malay Archipelago and beyond.

In 1822, Raffles implemented the Raffles Town Plan, also known as the Jackson Plan, to address the issue of growing disorderliness in the colony. Ethnic residential areas were segregated into four areas. The European Town had residents made up of European traders, Eurasians and rich Asians, while the ethnic Chinese were located in present-day Chinatown and south-east of the Singapore River. Ethnic Indians resided at Chulia Kampong north of Chinatown, and Kampong Glam consisted of Muslims, ethnic Malays and Arabs who had migrated to Singapore. Singapore continued to develop as a trading post, with the establishment of several key banks, commercial associations and Chambers of Commerce. In 1924, a causeway opened linking the northern part of Singapore to Johor Bahru.

Singapore sits almost directly on the equator, which gives it the hot tropical Southeast Asian climate. High humidity is constant throughout the year and year-round rainfall is also common. There aren't really seasons or weather patterns, and temperatures generally average around 88°F, give or take a few degrees a month. This means visitors will need to rehydrate frequently when outdoors.

Even though the temperature remains constant and rainfall is to be expected, there are certain months that are wetter and drier than others. Two primary monsoon seasons hit Singapore. The Northeast Monsoon (December to March) is longer, which uniquely brings both wet and dry months. Heavy precipitation is experienced daily during the months of December and January, while February and March are comparatively drier. In the Southwest Monsoon period, rain is usually experienced in the morning and lasts for about 30 minutes.

Singapore allows many nationalities including travelers from the US to enter the city-state without a visa. For more information if your country qualifies, see http://travel.state.gov/visa/.

For a small island, Singapore has a huge number of cabs. More than a dozen companies provide taxi services to the public, which operate more than 25,000 taxis. Meters are used throughout the city-state, and all taxis generally charge the same flag-pull rate of a few Singapore dollars. In the city center, cabs can be hailed from buildings with driveways (such as hotels) or taxi stands. Two reliable operators are SMRT Taxi (+65-6555-8888) and Trans Cab (+65-6555-3333).

Car rental is not popular in Singapore largely because the city is home to an extensive public transportation system that is much cheaper than bothering with a car. Nevertheless, some large rental companies operate from the airport and the city center, including Avis and Hertz. Tourists keen on self-drive will be spending at least SGD 100 a day, even with the cheaper, local companies. Roads in Singapore are well-maintained and drivers tend to stick to the rules of the road as a result of the heavy policing on the highways and downtown.

There are some basic tourist-orientated water taxis that run up and down the Singapore River. There are hop on/off points as the boats cruise the river near the Marina Bay Sands. These water taxis, which are often referred to as bumboats, travel to outlying islands such as Pulau Ubin.

The bus system in Singapore is efficient, but is not as convenient as the MRT rail network. However, unlike the MRT, buses in Singapore offer stunning views of the city and are still cheap. Passengers can pay cash using coins, but the fare system can be difficult to understand. Asking the driver or a local is a good option, as they are usually more than willing to assist.

The easiest and sometimes fastest mode of transportation for getting around Singapore is the Mass Rapid Transit (MRT) network. There is also Light Rail Transit (LRT) in operation. The entire system is electronic, so passengers will need to buy an RFID ticket and scan these when entering or leaving a station. 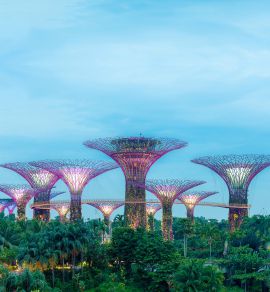 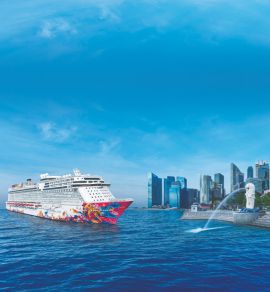 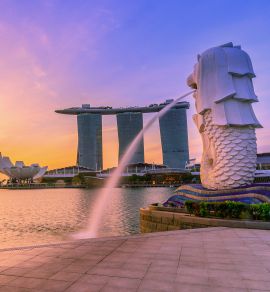 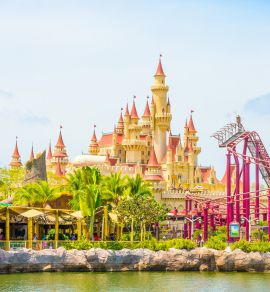