A holiday in Laos can be about adventure hiking tours through the rugged mountains and taking a break and soaking in the relaxed atmosphere in the charming towns. The pace of life here is different from other Southeast Asian nations, which makes a vacation in Laos truly unique.

Nestled on the banks of Mekong River, Vientiane is the smallest capital in Southeast Asia with the quiet and charming ambiance. Vientiane delivers a relaxing riverside break with the chance to discover beautiful old French colonial villas and serene Buddhist temples.

In the North of Laos, Luang Prabang is encircled by mountains and is 700 metres above sea level at the confluence of the Nam Khan and Mekong Rivers. In 1995, Luang Prabang was designated as an UNESCO World Heritage Site for its uniquely preserved architecture and townscape; traditional wooden buildings and European colonial mansions form a backdrop to the daily ritual of saffron-robed monks gathering alms. Luang Prabang, the former capital city and also the heart of culture of Laos, has become the top choice destinations for travellers in recent years.

Four hour driving from Vientiane, Vang Vieng is the best places for those who want to immerse in an authentic tranquil life alongside the Nam Song River or to explore the scenic limestone karsts, numerous caves and hidden lagoons. One of the last mysteries of Asia lies in the area around Phonsavanh.  Over 300 giant stone jars, carved out of solid rock, lie scattered around a plateau now known as the Plain of Jars. There are as many theories about their origin as there are jars, but as yet the mystery has not been solved. 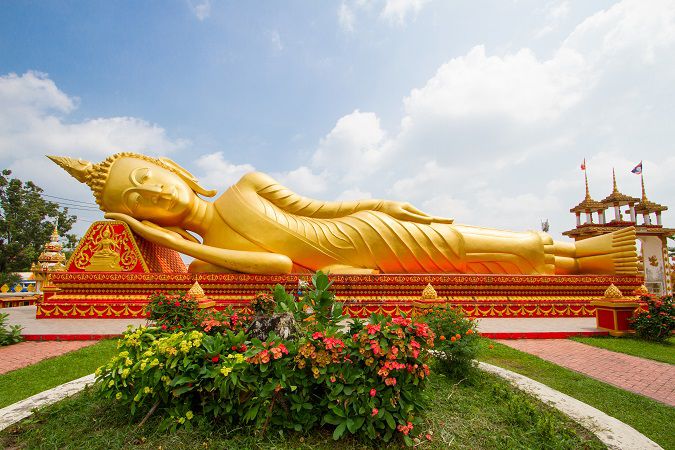 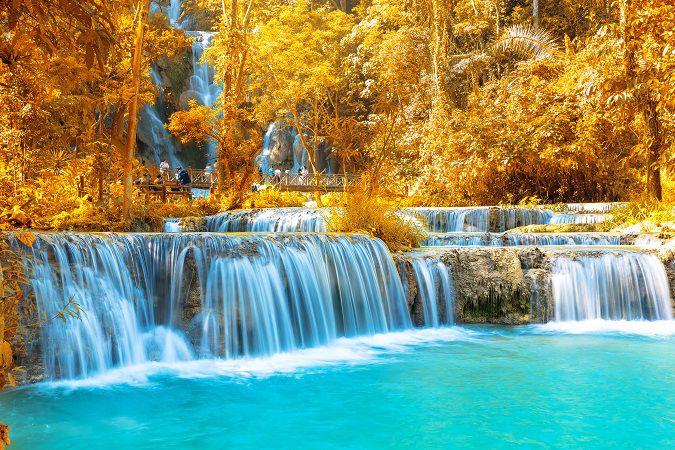 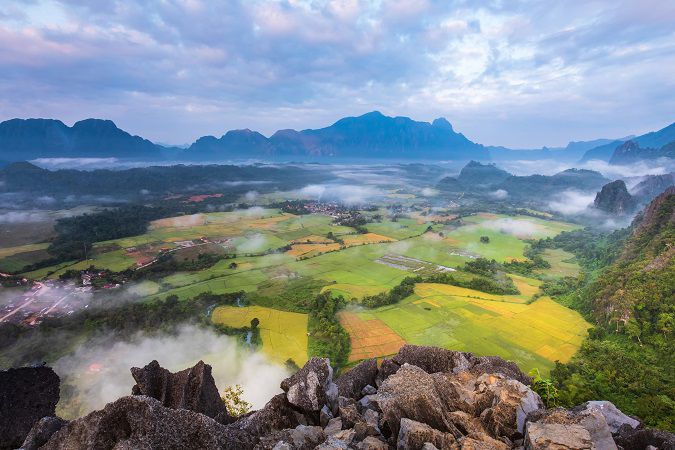 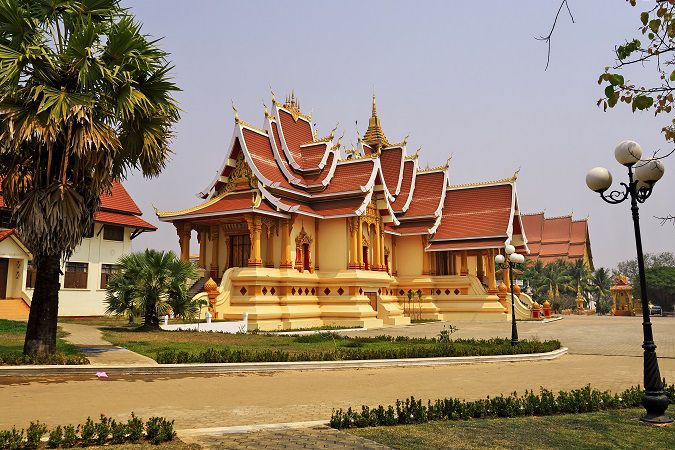 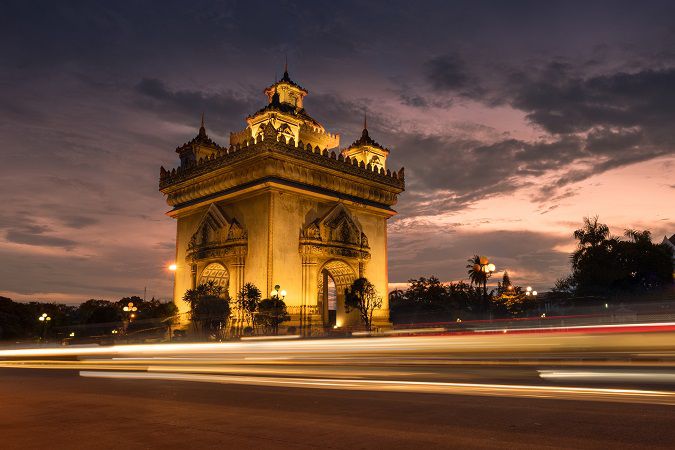 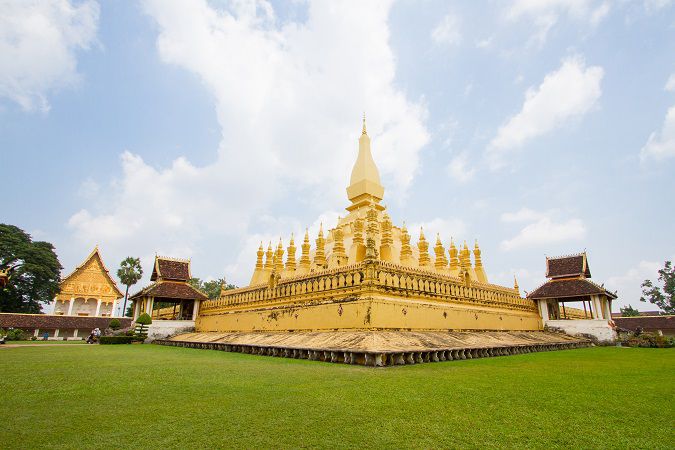 Laos is best visited between October and April, when the weather’s warm and dry throughout. River travel is best between November and January, when high water levels make passage easy along Laos’ main waterway, the Mekong River.

Originally, Laos is believed to have been inhabited by people migrating from southern China. The country’s population grew around the abundance and fertility of the land surrounding the Mekong and Me Nam Rivers. The first King of Laos was King Borom and legend has it that he had seven sons, with whom he divided up his land. In the 14th century, Prince Fa Ngum, who had been exiled to Cambodia, returned after converting to Buddhism and established the Lang Xang Kingdom (“kingdom of million elephants”). He was suceeded by his son, Ou Heuan, who established Laos as a major trading region. After his death in 1421, the Lang Xang Kingdom slowly eroded and the country was torn by internal turmoil.

The country was again united under Photisarath rule in the early 16th century, who moved the capital from Luang Prabang to Vientiane, primarily to protect the ruling family from Burmese incursions. He was followed by Setthathirat, who became famous for building Wat Pha That Luang. In 1637, Sourigna Vongsa took over the throne and expanded the Lang Xang Kingdom, which was considered to be Lao’s Golden Age, when arts and music flourished. He died without leaving an heir and subsequently the country was divided into three, leaving it vulnerable to Burmese and Thai attacks.

The 19th century saw Laos annexed as part of French Indochina and it remained under French rule until 1945. In between, there was a short period when the Japanese occupied Laos during WWII. After the war, the Americans helped establish the Royal Lao Army as the ruling entity, primarily to counter the rise of the communist Pathet Lao. However, the 1960’s saw the country descend into civil war and subsequently, Laos became embroiled in the Vietnam War. This led to heavy bombing by the US, leaving behind undiscovered explosives even today. Visitors can go to the COPE Visitor Center (Khouvieng Road, Vientiane), which explains the history of the conflict.

In 1975, the Lao People’s Democratic Republic was established and the king forced to abdicate. Kaysone Phomvihane became the leader under the Pathet Lao government. In 1991, the Lao Constitution was implemented, which moved the country away from orthodox socialism to more political and economic liberalization.

The biggest influence on Lao culture is Buddhism, which plays a role in the country’s arts, music and literature. Buddhism remains an integral part of daily life and religious festivals are important events throughout the year. Every day, people can be seen giving alms to monks and going to temple to pray and give offerings.

The minorities of Laos are also part of the country’s culture. Although 60 percent of the country is made up ethnic Lao, there are 49 other groups present. Of these, the Hmong hilltribes, who had been marginalized in the past, are growing in importance. Many were persecuted by the government after the Vietnam War for helping the US, and many opted to move to America. Today, some hold high political offices and they have their own culture and traditions.

A very important Lao tradition is the baci. It is a ceremony that is expected to enrich the spirit and usually entails tying white string around people’s wrists. Baci ceremonies are held for a range of events, including birthdays, farewells, weddings, births and so forth.

Laos has a tropical climate, with a pronounced rainy season from May through October, a cool dry season from November through February, and a hot dry season in March and April. Generally, monsoons occur at the same time across the country, although that time may vary significantly from one year to the next.

All visitors entering Laos must possess valid passports and visitors from non-ASEAN countries require a Visa. Visa can be obtained for 30 days from Lao Embassies and Consulates abroad. In addition, visa can also be obtained on arrival at international border checkpoints. The visa fee varies from between US$20 – 45 depending on the agreement with the various governments. It is possible to extend the visa at the Immigration Office in Vientiane Capital and through travel agencies.

Tourists can apply for Lao visa online at Lao Official Online Visa website www.laoevisa.gov.la. The website is owned and operated by the Ministry of Foreign Affairs of the Lao PDR. Lao eVisa processing time is approximately 3 working days. The validity of Lao eVisa is 60 days after getting the approval letter. It is a single-entry visa with the stay permit of 30 days.

The most popular method of transport in Vientiane is the Tuk-Tuk. These can be hailed almost anywhere in Vientiane but bargaining is essential. Taxis, Bicycles, motorbikes, and cars are also available for hire at many guest houses, restaurants, and shops in Vientiane. Bicycling and walking in particular are great methods of seeing the city, as it is almost completely flat, and most attractions are within a short distance of the center. 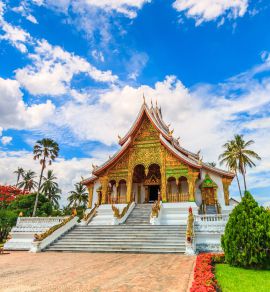 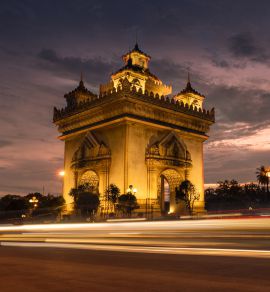 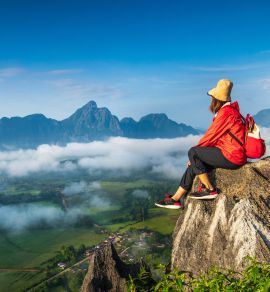 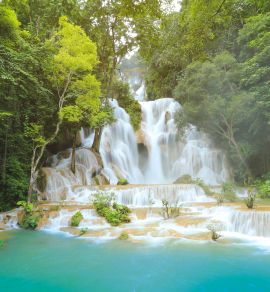